Michael Palumbo is arguably one of the most prolific and consistently original designers today. His interior designs and architectural projects are remarkable for their refinement, elegance and attention to detail. A designer, builder, visionary, artist and California leader in high-end modern home design with a passion for good design and quality craftsmanship, Palumbo designs homes that are truly a work of art. It is Palumbo’s impeccable standards of construction and use of high quality materials that distinguish him as a premier designer and developer.

Palumbo apprenticed in his father’s construction company in his ‘tween’ years while being shadowed by the pervading influence of his mother’s keen interior design expertise. Initially, Michael’s interest in building and construction was to earn money to continue his car racing prominence where he was lauded with several trophies both large and small. However, Michael’s mother, Joy Jacovino, a prominent interior designer with a significant following of her own work in the industry, taught Michael about color, texture and form. It is with the combination of these two influences that made Michael Palumbo the innate designer he is today.

From 1978 to 1983, he was exposed to the mid-century modern design prevalent in the southern California culture, working alongside architects and contractors. Palumbo often served as construction manager on the projects his father acquired. His talent was quickly recognized and he soon began independent commissions of his own, despite his lack of a formal college-level education. A physically spry, deliberative and reticent man, Palumbo grew to great success in his rapid transformation from a tradesman’s son to a designer working with Hollywood and Beverly Hill’s cultural and celebrity elite. He began his independent professional career designing upper class homes, joining the movement seeking a return to the purity of modern Asian design styles. One of the first to realize the influence of Asian design in California, he began his career in building new custom homes in the San Gabriel Valley for the Asian descent cultures. His design skills are also based on similar ideals such as Germany’s Ludwig Mies van der Rohe’s favorite aphorisms, “less is more” and “God is in the details”. He admires broad proportions, rhythmic elements of the theories behind Feng Shui, attention to the relationship of the man-made to nature, and compositions using simplistic form. He dismissed the eclectic and cluttered classical styles as irrelevant to modern times.

After the finding his legs in the Asian and traditional styles of the early 80’s, Palumbo joined his avant-garde peers in the long-running search for a new style that would be suitable for the modern luxury age. Progressive in his thinking he felt that Hollywood homes called for a completely new design and construction process guided by rational problem-solving and an exterior expression of high quality modern materials and structure rather than the superficial application of classical facades. While continuing his tradition of Asian simplicity design practice Palumbo began to develop visionary projects that rocketed him to fame as a designer and builder capable of giving form that was in harmony with the spirit of the emerging modern society of Los Angeles’ affluent.

The very prominent and famous area above the Sunset Strip where the streets have names like Oriole, Thrasher, and Nightingale are also known as the ‘Bird Streets’. Leonardo DiCaprio, Halle Berry, Wynonna Ryder, Madonna, Tobby McGuire and Keanu Reeves have lived there for years. However, a few other things that may go unknown about the ‘Birds Streets’ is that Michael Palumbo designed many of the houses there and for the ones he did not design, he welded a great deal of influence. Many other developers and designers began to follow his lead and began to remodel houses with the same high standards of a Palumbo design. 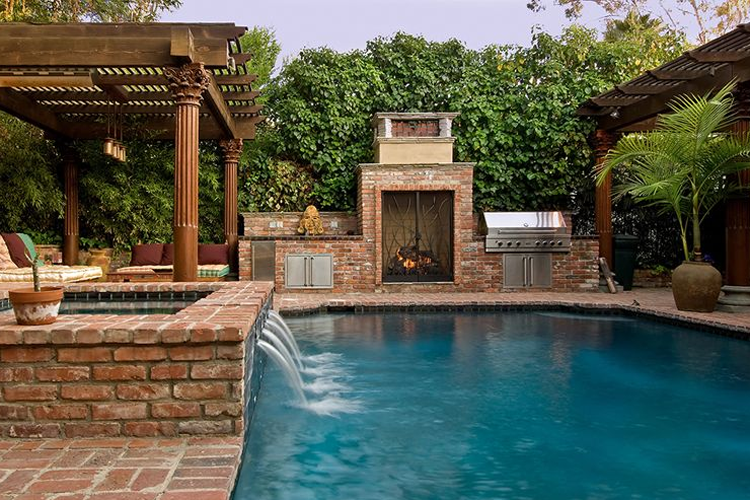 Like many other modern designers of the day, Palumbo based his own design theories and principles on his own personal re-combination of ideas developed by many other architects and designers who had pondered the flaws of the other design styles. He selectively adopted theoretical ideas with their ideology of “efficient” sculptural constructions using high-end modern industrial materials. Palumbo found appeal in the use of simple forms, clean lines, pure use of color, and the extension of space around and beyond interior walls. In particular, the layering of functional sub-spaces within an overall space and the distinct articulation of parts was pursued in an ambitious lifelong mission to create a new design language that could be used to represent the new era of technology and design.

He applied a disciplined design process using rational thought to achieve his spiritual goals. He believed that the configuration and arrangement of every designed and engineered element must contribute to a unified expression. The self-educated Palumbo studied the great architects and designers, past and present and foreign to enhance his own understanding of the character and essential qualities of the technological times he lived in. Yet his homes also were very direct, warm and simple when viewed in person. Every aspect of his design, from overall concept to the smallest detail, supports his effort to express the modern lifestyle, but with warmth. The depth of meaning conveyed by his work, beyond its aesthetic qualities, has drawn many of Hollywood and Beverly Hills affluent and lifestyle seekers to continue to further explore and seek his design expertise.

Palumbo Design has been designing, developing and furnishing custom homes for more than 30 years and has earned its reputation as a premier modern home designer and development company in California. The company’s two main services, Home Design and Project Management, provide clients with a complete package of services for new and existing homes. Home Design encompasses all design related decisions and decorative purchasing of materials and furnishings that goes into developing a home and creating warm and inviting interior spaces. Developing residences using the highest quality materials, engineering and design techniques to create homes that stand the test of time. From a solid foundation to framing and finishing, Palumbo Design understands the engineering integrity of each home is of utmost importance. With a complete array of building and design services, Palumbo Design will transform your entire residence into a personal indoor and outdoor retreat with custom features to meet your individual needs.